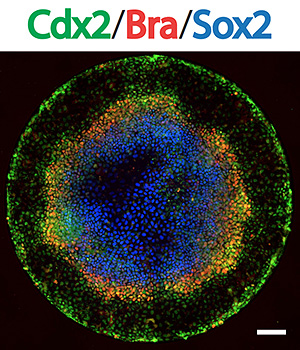 Embryos allocate cells to the three germ layers in a spatially ordered sequence. In response to growth factors, human embryonic stem cells (hESCs) can generate the three germ layers in culture, however, differentiation is typically heterogeneous and spatially disordered.  Here we take a first step toward recapitulation of early embryonic patterning by showing that hESCs confined to circular disks comparable in size to mammalian embryos using micropatterning technology and treated with the gastrulation inducing signal BMP4 differentiate to an outer trophectoderm-like ring followed by the three embryonic germ layers in an ordered, reproducible sequence along the radial axis of the colony. Fates are defined relative to the boundary, but have intrinsically determined dimensions; small colonies correspond to the outer layers of larger ones. Self-organized cell communication limits the range of BMP signaling to the colony edge but induces a broader gradient of Activin/Nodal signaling that patterns mesendodermal fates. These results demonstrate that the intrinsic tendency of stem cells to make patterns can be harnessed by controlling colony geometries, and provide a quantitative assay for cell-cell signaling.