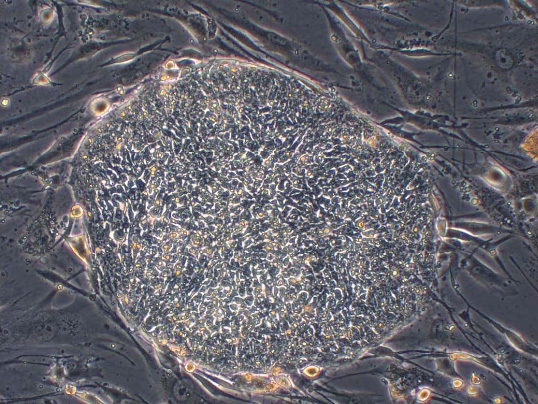 To address whether the default model of neural induction is conserved from amphibians to mammals (and humans in particular), Dr. Brivanlou’s laboratory was among the first to work directly in hESCs. With private support from the Juvenile Diabetes Research Foundation, Dr. Brivanlou and colleagues derived several hESC lines, called RUES1, 2 and 3 (Rockefeller University Embryonic Stem Cell Lines 1, 2 and 3). Using other private funds, his group established an in vivo platform to study hESCs by demonstrating that the RUES1 cells integrate into the mouse embryo, migrate to the inner cell mass when put in close contact and divide and differentiate alongside their mouse counterparts, suggesting that the speed of differentiation of human cells can be reprogrammed to match the mouse. The RUES lines were among the first 13 hESC lines approved for use in research funded by the National Institutes of Health (NIH), under the NIH Guidelines for Human Stem Cell Research adopted in July 2009 under the Obama administration. In this context, the group has also recently developed new tools to perform reversible transgenesis in human and rhesus monkey embryonic cell lines, expressing a variety of reporter constructs controlled by germ layer and tissue-specific regulatory elements. Their current work focuses on the molecular dissection of the defining properties of ESCs — their capacity for self-renewal and their ability to differentiate into a range of cell types.

The three embryonic stem cell lines described on this page, RUES1, RUES2 and RUES3, are available to the research community upon completion of the stem cell request between the receiving institution and The Rockefeller University.